We're still tooling up equipment at the shop in preparation for snow plowing season. There have been a few slippery days when I went out salting but no pushing yet. Its this time of year when I need to get my head in the game and think about the tools available to me and safely using them. A while back I posted about a pic I look at to keep myself in check. I have a few for the winter season too. 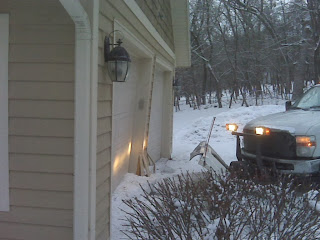 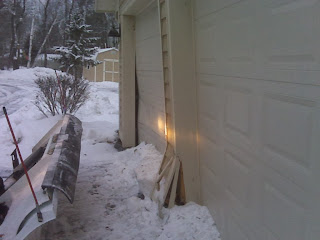 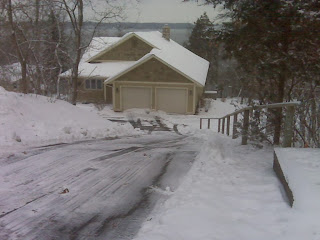 I bet I've plowed this drive fifty times. What you can't see is a row of rocks on the left edge of the drive. I accidentally touched one of them with the snow plow and it upset the truck just enough that I went into a slide. This is a U shaped drive and I already had dumped a little bit of salt on the bottom near the garage door. This was supposed to prevent the problem I had of sliding into the door but my slide started too close to the top of the drive and I gained a lot of speed on the way down. There wasn't enough snow to build up in the blade and slow me down and I wasn't able to make the turn. The result was a broke ass garage. If I would have plowed up from the bottom I would have also had a broke ass salt spreader. 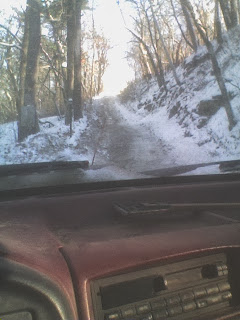 A few years back under a different employer I had a plow route that included a lot a steep drives. Word got around that I was willing to do these drives with a truck and I ended up doing some of the worst drives in the area. Hey, I was getting paid to go 4-wheelin! 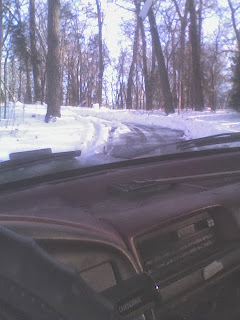 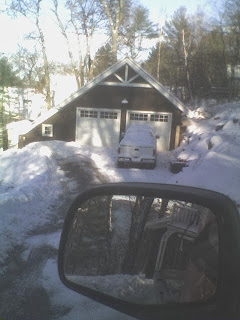 These two pics are the same drive. I would get stuck down here everytime I tried to plow it. Even though I would drop salt on the way down there were two off-camber sharp turns where the blade wouldn't scrape clean. This meant to get back up the hill I needed to do some shoveling and haul a bunch of salt in a bucket. I don't miss this drive. It was exciting for a while but really a lot of BS. These days the excitement comes from trying to manage a crew and get everything done on time. Nothing steeper than a loading dock for me.
If you're out there dealing with snow I wish you luck. May your salter never freeze up and your blade raise every time you hit the button. If you're traveling, be aware of the plow trucks. Most of them are in a hurry to complete their routes on time and many have poor visibility when backing up. Remember that a lot of these independent guys are out there twelve hours or more. They are tired and frustrated because there are always cars parked in the wrong spot. It might do you well to cut them a little slack.
Enjoy the snow and have a safe winter!