Things have been pretty busy for me over the holidays so I haven't done much on the bikes lately. Mother Nature slammed us with a lot of little snow events in December. For a while my schedule was plow, eat, sleep, repeat. No time for bike projects. Also,  Greg, the small engine mechanic at work had an accident and I've had to fill in for him for a few weeks now. My need to fix stuff has been fulfilled with other peoples problems. 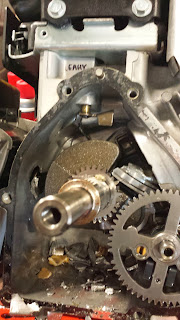 The forecast doesn't have any snow in it and I've got a handle on my role change at work so now I can think about bikes again. I need to rewire the Sportster because the original harness has been chopped up so many times over the bikes life. This means I have to decide what features the bike will have so I can make a harness that works. I'm not set on what I want to do with the front end but I have a pretty good idea what needs to happen out back. Besides the '59 Caddy tail lights and the converter needed to run them, I need license plate illumination and I want to add a plug for heated gear. I've also decided to move the horn from its stock location on the left side of the engine. My leg was always bumping against it so I decided it had to be moved. It's a Wolo air horn and it seems to fit nicely below the seat just behind the battery box. 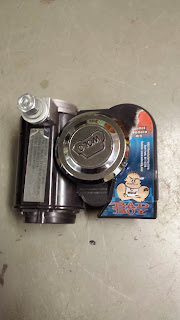 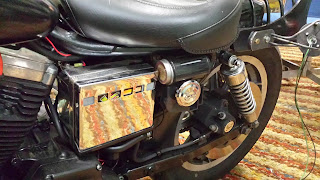 An air horn is usually a little bulky to fit on a bike but this one isn't too bad. It kinda tucks into the spot that used to hold the ignition module that I didn't need for this 5 speed motor.  Ya I know its big and ugly but I've had loud horns on bikes and they have saved my butt more than once. Besides, big and ugly kind of fits the theme of this Sportster.
Posted by Scott Seidl at 9:53 AM