Earlier this year I was cleaning off my bench at work and noticed there were a lot of used spark plugs and replaced carbs laying on it. There happened to be an ice cream bucket nearby and I started tossing plugs into it. I saw another bucket and started tossing old carbs into it. There is absolutely no good reason for saving old spark plugs. If you want them come get em. The carbs get some pieces salvaged off of them every so often so that's my excuse for hanging on to them. I should note here that Greg works on four strokes on the other side of the shop and has at least one bucket full of carbs he's always digging in. 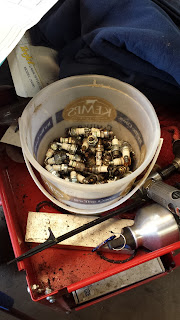 I'm not religious about saving this crap. If I remember then I toss the old ones in the bucket. I don't know why.  Many just end up in the trash can on the other side of the bench and as I look at this pic I realize how stupid it is to be saving these. I think I'll empty the bucket tomorrow. 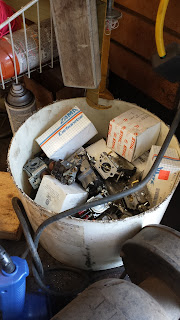 Here is the bucket of carbs. What makes a carb bad and not rebuildable? Here is my rule of thumb. If a carb won't prime and it's not the fault of the purge bulb, fuel lines or filter, then it gets tossed in the bucket. These carbs have check valves in them that get plugged or damaged. When I say damaged, many times it's from someone using compressed air to "blow out" the passages. Many times they blow out these check valves ruining them and then you have a carb that won't prime or run right. A carb kit doesn't usually come with new check valves so rebuilding is a waste of time. Besides that when you add the cost of a kit and labor, it is cheaper to just replace. In the pic below is a black Murray(MTD) trimmer. It's getting a new $19.99 carb. You just can't rebuild them for less.
Today the boss walked up to my bench and asked me if I could do something for him when I got caught up. 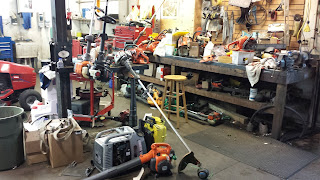 I told him I'd do it for him now because I didn't know when I'd get caught up and I was leaving for vacation the third week of august either way. This mess is just the "in progress" pile. Yep.