Trying To Capture The Moment

I was on the way home from work yesterday enjoying the unusually warm October temps and a colorful sunset. While scootin along I was trying to come up with an idea for todays blog. I came up with bupkis. I suppose I could write something cheezy that would express just how great this ride was. None of that is necessary. Most of you that ride know the feeling when you connect with the bike and environment at the same time. Yes I'm commuting but on special days it doesn't feel that way.
In an effort to capture the moment I figured a picture was in order. I pulled over, snapped the pic and voila, I have a blog post. 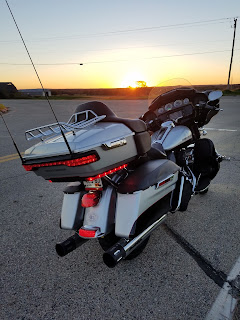 As curious as it may seem, the one thing that takes up the most pixels in this image is also the one thing that matters the least. Sure it's a nice bike but when I feel this connection with my surroundings and my ride it usually doesn't matter what the ride is. Oddly enough for me it also doesn't have to be a nice warm sunny day. I want to try to explain this to those of you that don't ride but can't find the words. Maybe it's kinda like that scene in the Matrix movie where the dude is dodging the bullets. There is some kind of control that happens automatically as I seemingly slip into another dimension.
Ya, so much for not sounding cheezy.