The last time we talked about the BSA I was complaining that I lost the bearings for the clutch basket. Twenty of the little suckers and I figured I had lost them during disassembly a few decades ago. I ordered new ones and have that side of the engine buttoned up now. I used new allen head bolts in place of the buggered up phillips head screws that were in there. 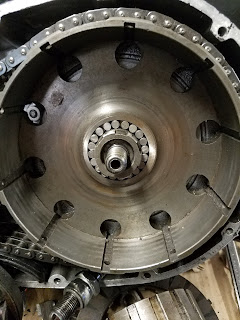 So I figure the next step is to put the engine in the frame because it's already too heavy for me to lift and set in there without damaging the frame paint. I laid the engine on its side and planned on setting the frame over it. 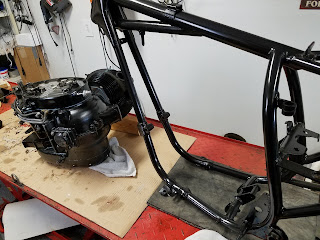 Simple, right? Just grab the engine bolts...now where did I put those bolts? They must be nearby because I only separated the engine and frame a few years ago. I searched for a while and guess what I found? 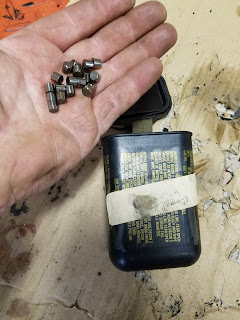 Twenty clutch bearings lightly oiled in a sealed container. Good for me to have packed them this way and marked the container. Now why couldn't I find them before I ordered new ones? Sigh. Where are my motor mount bolts? I swear if I buy new bolts and then find the old ones I'm gonna be real pissy.

I think I'm gonna go on an all out cleaning mission in my shop. I'll touch everything. Some stuff will be put away and a lot will be tossed in the garbage. I think if I touch it I'll remember that it hit file 13 and then I won't spend hours searching for something that isn't there. We'll see how it goes when it comes time to actually throw the stuff away.