I know it seems like I'm draggin this out but its the only project going right now and progress really is this slow. I had a couple hours to dink around in the shop and used them to work on the roll up door. Here I'm adding a piece of channel as a guide for the back of the door. Without it the individual slats of the door can slide sideways and jam it up. 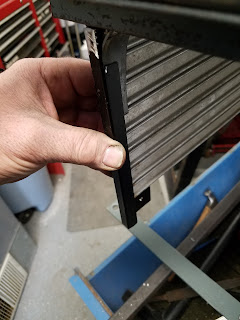 I was planning on using a key lock to secure the door but came up with another idea that will allow for a hidden internal mechanism. Part of the plan includes these catches that I made. 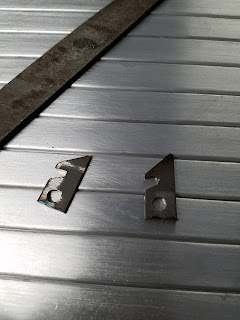 They are going to be welded to a rod secured under the door. Here is the 1/4 inch rod. This is blowing my mind because I have no idea how I did this and don't think I could do it again if I wanted to. The rod was clamped squarely in a vise and I thought I was cutting it 90 degrees to cut it to length. I used a hacksaw and as you can imagine it only took a few strokes before the scrap end hit the floor. When I looked at the rod, this is what I saw. 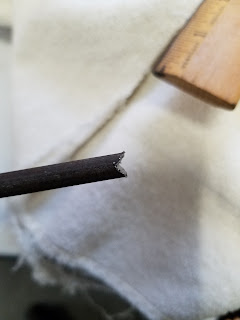 How the hell did that happen? I'm not building an aircraft here so detail isn't critical and it makes no difference in the construction of the tool hutch but I can't figure out how it happened. It should at least be halfway straight then maybe an angle if I was forcing the blade and actually broke off the remaining material. Anyway, that's my story and I'm sticking to it.
Here is a piece of square tube modified to act as a support for the catch rod and also a door stop. Self tapping sheet metal screws probably wouldn't stay tight with the door dropping on the stop every day so fine thread bolts were installed. One thing I like about these projects is using crap I know has been around my shop forever. I know for a fact the rusty bolts used here were put in a labeled organizer over twenty years ago, before we moved into this house. 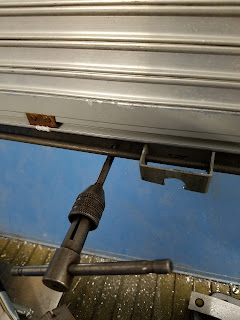 And one of the catches in place as seen from the inside of the cabinet. 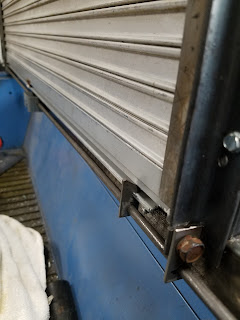 There's a lot of stuff mocked up and tacked in place. My gasless wire feed welder makes a big mess so I'll probably take it to work and weld it there then bring it back home and put my paint booth to use. More updates as time allows.