As you know, back in November we purchased a used car for my wife. Part of the deal was that they were gonna replace a mirror that they broke while it was sitting in the showroom. The salesman also stated he ordered a special bulb for a halo ring that was out. I never saw a bulb out in the front but figured whatever. After the first night drive with the car we noticed the headlights needed aiming and the salesman stated they would be happy to adjust those as well.
A couple weeks after the sale the dealer calls and tells me the mirror is in but they were still waiting on the bulb. I tell him I'd rather have it all done at once and not have to take off work on two separate occasions. No problem, he'll call me when its in. After almost six weeks from purchase I call him to find out the status. What? This isn't done yet!? he says. I want to say "you're a jackass and didn't follow through" but I just reply "no, but I'd like to get it taken care of before the holidays". Arrangements are made, but not easily, for the car to go to a sister location for the service.
Upon arrival I wait for the salesman to arrive. Hes gonna take care of everything. Basically I think hes running it through the back door and off the books. Service departments must love that bullshit. After an hour in the waiting room a tech approaches me and asks me to come out into the shop with him. We walk through a service garage with like twenty lifts and all the latest high tech gadgets. Every tech had a toolbox that certainly will take the better part of their career to pay off. Past the huge parts department and into another garage about half the size of the first. I envisioned the car posed neatly in front of a wall with markings and stripes and numbers and lasers all laid out for aiming headlights. We approach the BMW. Its sitting in the aisle on an angle with the right front tire damn near in the floor drain. The head lights shining on the garage door. The "tech" says, "what do you think"? 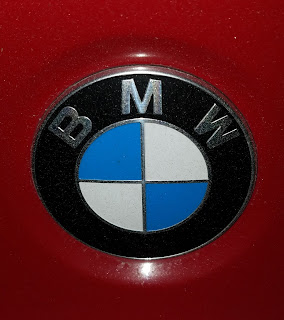 You know when I was younger there were a lot of times when I went through life with blinders on and just saw what was right in front of me. I reacted to those things without the whole picture and all the information. Sometimes that made me respond like a dickhead. As I get older I've learned to factor in all my surroundings before I come to any conclusions. For that reason I decided to look around the room fully expecting to find a hidden camera. Maybe Allen Funt from Candid Camera would pop out from behind a car. That's Punk'd for you younger folks.
What do I think? I think it looks like two dots on a door. "Whudda ya mean?" he says. "I adjusted them." I asked him how high the centerline of the lights was off the floor in relationship to the bright spots on the door. I could see he was lost and had no clue if they were aiming up or down from level. At this point I just wanted to get this guy away from the car. I went to close the hood but before I could he pointed out where the adjustment screws were. "I think if you turn them counter clockwise they go up". Thanks I replied but was thinking he just adjusted them and already forgot which way he turned them. He announced that he also replaced the halo bulb. It wasn't burnt out but he replaced it anyway. There's four halo bulbs. I wonder which working bulb he replaced?
I then wanted to look at the mirror they were supposed to replace. It wasn't done yet. I asked why and he said nobody told him about a mirror. I looked around again and noted that no camera crews were on location. This means he spent an hour adjusting the head lights and replacing a bulb. We walked to the parts window and they knew nothing about a mirror. I told the tech I was gonna go to the waiting room and call the salesman to figure out what was up. When he didn't answer my call I decided to just go over to that shop. I asked the service desk to have my car brought around but they had no record of it being there. Nice. I told them the techs name and asked if he could bring it around.
At the other shop I waited half an hour for the salesman to show up. That's not anybody's fault but it just added to my frustration. Face to face he admitted he dropped the ball. The new story contradicted the first story and what it basically boiled down to was that the car needed to go to an independent glass shop on the other side of town. Fine. Whatever. Lets just get this over with. Give me the address and I'll take care of it.   When I arrived at the glass shop the nice lady behind the counter had my mirror sitting on the desk. She looked at the car, looked at the mirror and then reached under the counter for a tape measure and headed outside. There was a large frosted glass shower stall on display in their showroom and I peeked behind it thinking there would be a camera crew hiding there. Nope. When the woman returned she announced that they had the wrong mirror and it could take up to five weeks to get the right one. Wonderful.
I wasted three hours that I could have been working only to get a bulb replaced that wasn't burnt out and to get my headlights mis-adjusted. I was punk'd and nobody got it on video.