We went through a phase at work a while back where guys were coming into the shop on weekends to work on their vehicles and they would use the shop tools. Sometimes they couldn't find the tool they needed and started putting their grubby dick beaters on the tools from the regular techs boxes. None of us really cared as long as they put the shit back where they found it or told us if something broke so we could replace it. That seems like a simple enough request but tools would disappear only to be found days later in the wrong box. That's bullshit so we all started locking our boxes.
Including the new hutch I'm building I'll have five locks to open in the morning. I failed on my attempt to buy keyed alike locks and decided to do something different for the hutch. All the box keys will be stored in the hutch and the hutch will opened with a key pad. This way I won't have to carry a bundle of keys or find a hiding place for five keys. 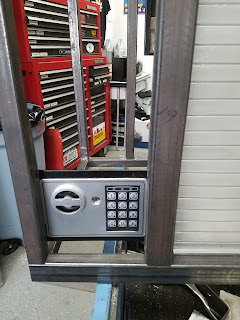 This is one of those things I should have thought through before I started the project because the framework of the box would have been a little different here in the above pic. I can work around it easy enough by adding some levers and latches and stuff but it could have been as simple as a deadbolt type of latch. 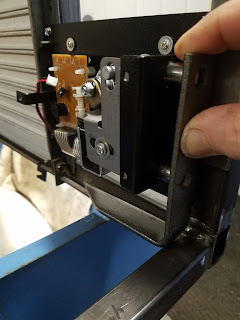 I had planned on having this part done for todays blog but got side tracked. Basically a wedge will push a lever that will rock the catches open. Because I have zero trust in the chinese locking mechanism I'm adding a secondary keyed release for emergency use.
I'll post some better pics when its done.