This week I'm reliving a personal hell that I endured about twenty years ago when I decided to paint and carpet our spiral staircase. Its all part of our grand plan to remodel this dump one room at a time. I remember what a pain in the ass it was to get a smooth coat of paint on such a pieced together metal structure so this time around I cheated a bit and went with a copper color that dries with a hammered effect. 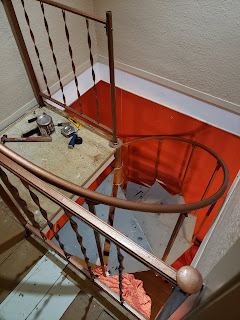 The color actually goes well with the other walls it runs against. 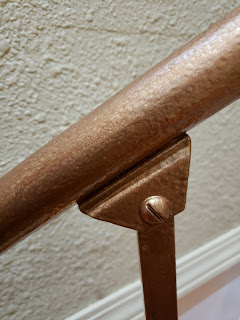 So far I've stretched this paint job out three days and it will for sure need a fourth day because of a separate support structure that stands next to the staircase. I'm planning on putting that off for now because it doesn't need to be done before the carpeting happens. That job will be its own nightmare. Right now I'm just getting along by tipping back a few cool ones and catching a paint fume buzz. 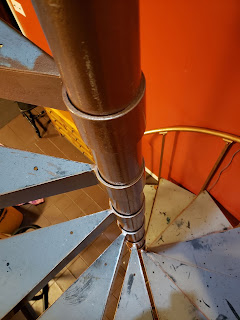 The carpet gets cut into funny shapes then stapled to plywood that lays on each metal step. The one advantage we found during this paint job was that the cats won't climb the metal steps. If I would have known this before there would have been times I'd have pulled the plywood steps to keep the cats out. It may happen when I start remodeling the bathroom up there. 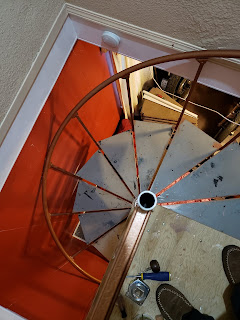 In other news, I have made a new personal policy regarding eating grapes that I need to stick to. No eating grapes in the dark. Especially gas station grapes. I bought a cup of grapes for breakfast the other day. A much healthier decision than a cafe mocha and breakfast burrito, or so I thought. It was a dark ride to work and I just popped open the cup, set it in the cup holder and started eating as I drove. Some of those grapes had the consistency of a puss sack and I'm sure that if I had seen what they looked like they would have never gone in my mouth. Part of me said "man up and eat" another part of me spit a few out the window.
All that morning I had a buzz going. Was it the grapes? Was it the large black coffee? I'm thinking somehow it was the grapes because the next day I bought another large coffee that was labeled as having more caffeine and there was no all morning buzz like before.
Tomorrow I'm having orange juice and a banana. That seems safe.

Email ThisBlogThis!Share to TwitterShare to FacebookShare to Pinterest
Labels: painting