This years annual bike vacation has been replaced with some home diy. Today I want to talk about how much it sucks to paint an old house. The siding is aluminum and only needs to be hit with a pressure washer. That is yet to come. The overhang is a real pain in the ass because of the amount of scraping that needs to be done. 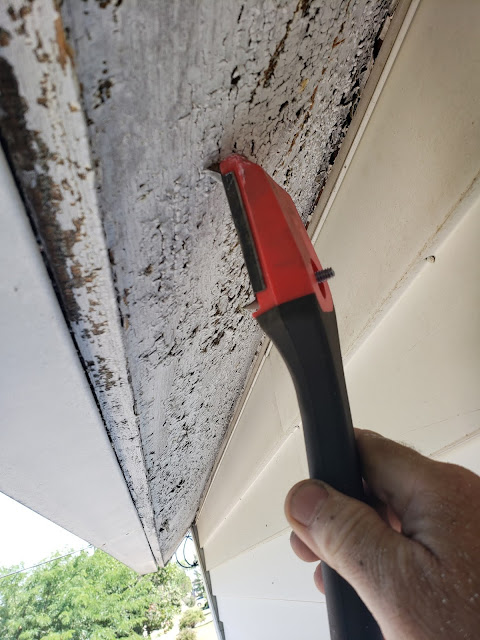 The loose stuff comes off quite easily. The pain in the ass part is that half of this overhang can't be done while standing in the lift basket. I use the lift to get on the lower roof and then squat/kneel while scraping. Painting these areas is worse because I also have to deal with a gallon of paint that I've been setting on the sloped roof and holding in place with my foot. I know it sounds like a bunch of whining and it is. I'm typing this after a 13 hour day of scraping and painting and I'm sore.

Now just regular old scraping from a comfortable position isn't too bad. I hand scraped about 80% of the roof with a 2 or 3 inch Red Devil scraper. I was able to kneel on a pad in the lift basket and just scrape away. I probably spent 1/3 of my time getting up, working the lift controls, and getting back down and scraping. What that thing needs is a bluetooth control that straps to your wrist or something similar. 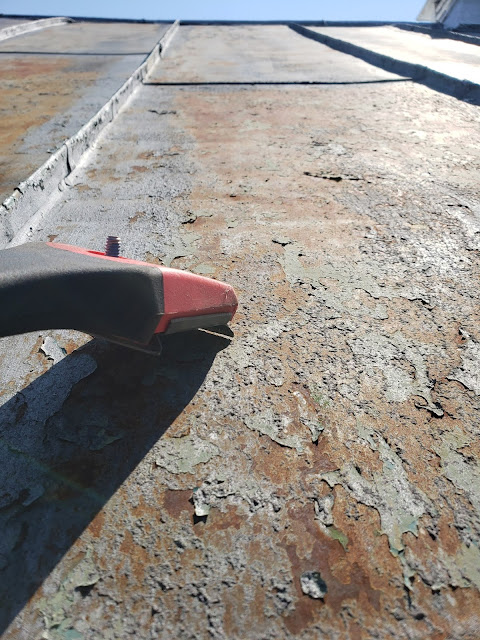 Once I had everything scraped I used my handy dandy Echo battery powered handheld blower to clean up the mess. Speaking of mess, this roof paint is some nasty stuff to work with, 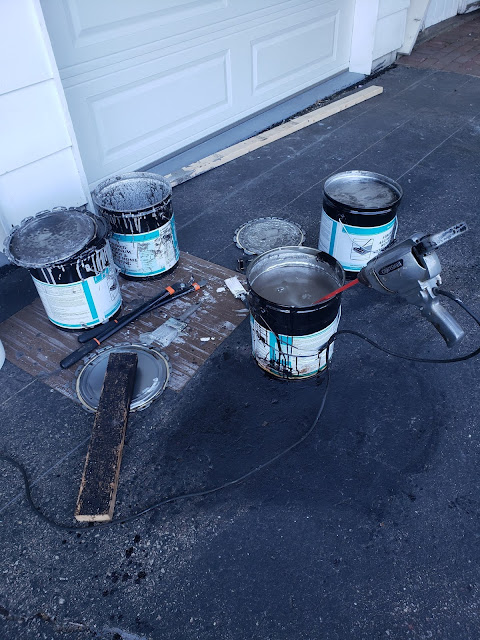 I had some inconsistent results from the first day where the first bucket of paint dried a different shade than the second. For this reason I spent some extra time mixing all the buckets this morning. Once I popped the lid on these things, some of them had a hard layer on top that seemed like the aluminum. Others had a less hard layer that seemed more tar-like. My handy dandy old school Craftsman drill handled the chore of mixing just fine.

In the end its all about protecting the metal roof. Appearance is a plus too and it doesn't look too bad. Now is that because it was so far gone that anything would look better or does it really look decent? The nice thing about roof paint jobs is that they all look good because you're always looking at them from a distance.

Email ThisBlogThis!Share to TwitterShare to FacebookShare to Pinterest
Labels: painting