When I got rid of my big touring rig I decided I still wanted something that would eat up miles of asphalt but have some power, decent handling and the ability to haul some stuff.  I spent a lot of time looking around for the right bike. There are a lot of bikes that would have fulfilled most of my requirements but not the requirement that it be a little unusual. I didn't want the same sport touring bike as the next guy. I wanted something you don't see everyday. I wanted to be able to pick it out of a crowd of bikes with ease.
I was on a joy ride one day and found myself at a Ducati dealer. I couldn't find anything that interested me but before I could leave a salesman cornered me. I explained what I was looking for and we discussed my riding habits. The salesman claimed he had an Aprilia Futura that would be just right for me and we headed to the back shop to look at it.
A what? I knew about Aprilia but I wasn't familiar with the different models. 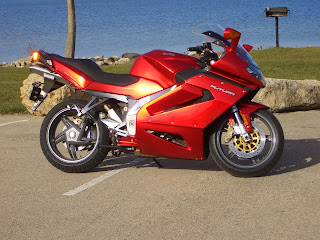 When I first saw it I really liked the color. We pushed the bike outside into the sunlight and I fell in love with the color. The angular lines, single sided swingarm and under tail exhaust all caught my attention. 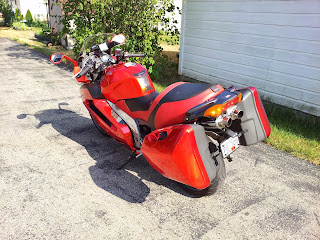 I thumbed the starter and brought the Rotax v-twin to life. It let out a pleasing roar. I was liking what I heard but none of this mattered if it rode like crap. The salesman gave me the green light for a test ride so I grabbed my helmet and took off. 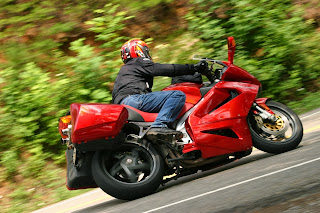 It most certainly did not ride like crap. This was a good handling bike with decent torque and the ability to haul a lot of stuff. This Italian beauty was as close to rare or exotic as I was going to get so after about an hour long test ride I returned to the dealer to negotiate the price. We came to an agreement and it was all mine. 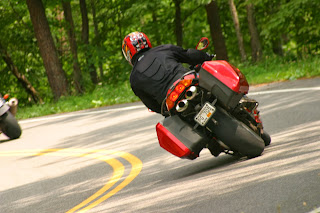 I put over seventy thousand miles on this bike. It only let me down twice in all those miles and once was a bad battery. The other was a bad side stand switch that I was able to bypass and continue on my way.
One day last fall I had to travel the entire length of the state of Illinois. It was raining, I was cold and tensing up and getting sore. For two weeks after that ride I was still sore. I don't know why this ride was so much different but it marked the end of my desire to ride this bike. I finished the season on the LTD before its transformation to the rat turd. The following spring I didn't even run a tank of fuel through the Aprilia before selling it.
The new owner is a friend of mine. When I mentioned the bike was for sale she said "I'll take it" before I ever gave her a price. This bike has that kind of effect on people.  A few months after the sale I met up with her. I always thought of the bike as a mean machine with a serious roar. She changed the image of the bike a bit by re-installing the baffles and adding a butterfly sticker on the back. She also named the bike "Little Annie". 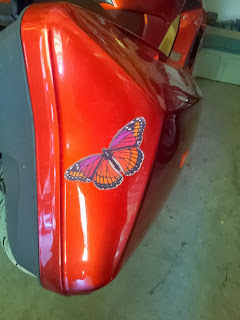 The sticker and the name were a bit of a shock but only for a nano-second. I know the bike will be well cared for and enjoyed.

When I think of the different bikes I've had and their ability to eat up miles in a hurry, this bike was by far the best. My riding habits have changed a bit over the years. For a while it was all about how far I could go in a day. Now, I still ride all day but its more about enjoyment than distance. I've slowed down a bit to catch a whiff of the roses, but don't expect me to stop.