This blog isn't just about bikes. Its also about other things that interest me of a mechanical nature. I may also throw in a few personal observations from time to time about stupid crap I see or do.
I have been posting on Sundays and Wednesdays. I'm gonna try to keep Sundays posts about bikes. Wednesdays posts may wander into other areas. I was thinking I need a name like "Workshop Wednesday" or "Wing Nut Wednesday" then the title of the post. I'm open to suggestions. My daughter suggested Willy Wonka Wednesday because things get crazy around here. We're seeking professional help for her.

My employer, from here on referred to as "the boss", decided one of our tractors was ready to be replaced so he traded it in on a new John Deere 3520. This is a nice size machine as it can handle most attachments pretty easily and also trailers easily. This will be a rental machine next spring but not until we break it in this winter pushing snow. It was decided that we put a Blizzard SpeedWing blade on it and also some weights. Making the mounts to do this would be my job. 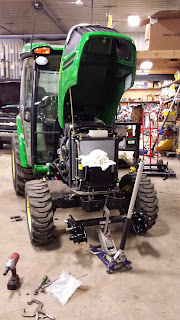 When I start a project like this I like to hold the pieces in place and visualize whats needed to mount it there. The piece on the jack is the push bar for the plow. I need to build a fixture to mount it to the tractor. 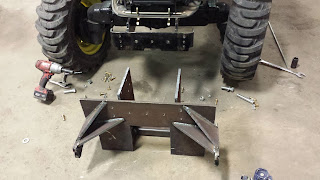 It took me a full morning of cutting, welding and drilling but this mount should be plenty strong. There is also a bar that will run all the way to the rear of the tractor to help sturdy things up. 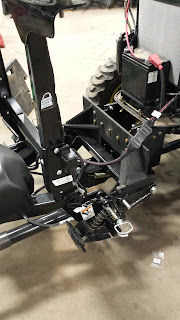 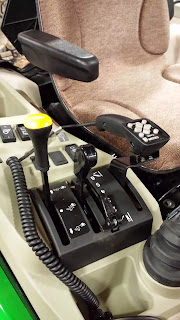 It all fits together quite neatly. I took advantage of an open slot in the dash panel to make a bracket for the plow controller. These days they offer controllers in joysticks or hand held units. Some people argue the hand helds are the best and they are by far the most popular. I hate them. I like to be able to reach to the same spot every time and know the controller will be there. If I try to use a hand held I am always dropping or losing it. I'll set it down to use the phone or shift the truck or run the salter and when I look for it again it has somehow worked its way down between the seats or worse. The cord gets tangled around my leg or the seat belt and I waste a lot of time messing around with it when I should be getting work done. I think its gremlins. For that reason I mounted this hand held unit in a spot that it can be used as a fixed unit or be taken off the bracket and used as gremlin bait.
The next step is to add some weight over the front tires so this tractor will be able to steer with a blade full of snow. 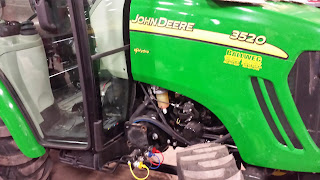 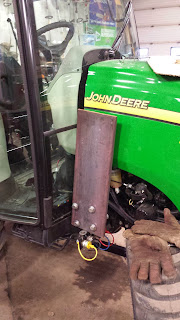 The first step was to remove the mounts for the loader bucket. I then made a cardboard template of the 100 pound weights I was to use and then decided on a size for this upright piece. 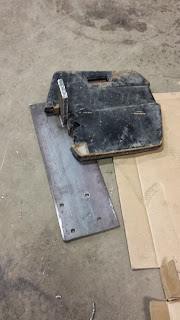 A little more cutting, welding and head scratching and I had a plan for the bracket. One piece isn't shown in this pic. I knew what I wanted but this was clearly a "design as you go" project. Ya I know its just a bracket but I didn't want it to fail. 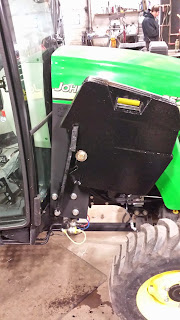 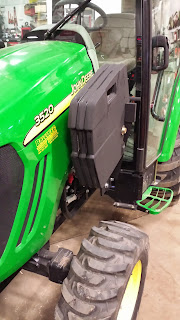 The finished bracket and weights. The large bolt locks the weights to the bracket.
The boss suggested each bracket was overkill for 300 pounds of weight. Maybe so but I like to think its one less thing that will give us problems this winter. I hate down time that could have been avoided. I hate gremlins too.