Gear Head. A person very interested in all things mechanical. I'm a gear head and I have the need to create things, tinker or just take stuff apart to see how it works. It's worked ok for me. I make a living fixing stuff. Oddly, I also make a living killing stuff.
I don't have unlimited funds so most of my projects are done on a budget or with whatever is available at the time. For me, if I get started on an idea I need to follow through with it even if its stupid or I know it will fail. It's the only way to get it out of my head. Successful projects are either used by myself or sold/traded. Unsuccessful projects are recycled or tossed in the scrap metal dumpster. I have this rule. If something I make sits around unused for a year then it gets tossed unless its really cool then it gets another year.
I'm not a big fan of shoveling the driveway. Some people are but they have a whole different set of issues than I do. I like to think of ways to make life easier. Maybe I'm lazy.
I have a snowblower. It works pretty good when we get a few inches of snow or more but when there is less than that it doesn't blow the snow very far. I found an old snow blower where the auger and impeller were shot but the motor and drive were ok. This was to be the base for my gas powered shovel.


I can't remember if he gave it to me or we made a trade but I got this 30" blade from Al. I simply removed the blower, made a bracket that allows the blade to float up and down and attached the blade. 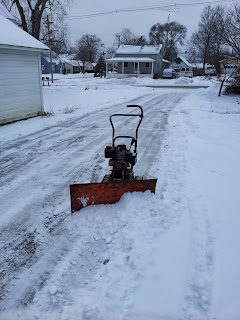 It works pretty good but could still use a little tweaking. I plan to make something that will allow easier angling of the blade. Maybe the same style crank a snow blower chute uses. I also want to add some weight so I can use it in deeper snow if I have to. Lucky for me, Al was cleaning his garage the other day and found some nice weights he knew would work on here.
This idea is out of my head and the project works good enough to have saved itself from the scrap metal dumpster.