It was a cool fall morning. Dan and I were weaving our way through some southern Wisconsin twisties on our way to the Slimey Crud Run. I was on an Aprilia Futura and he was on a Triumph Speed Triple. We were each doing our own thing and there was a big gap between us. Every now and again I would check the mirror and see him back there. After a few more miles of this Dan suddenly disappeared from my radar. I slowed down during a long straight section hoping to see him round the last corner but it never happened. When I turned around to find him I was glad to see he was vertical. Dan was the victim of road gremlins. In this case it was a flat rear tire.
I asked him what the plan was. He said something about a friend and a trailer. We were quite a way from home and that would eat up the rest of the morning and kill the plan for slimey crud. I let him sweat it out a for a minute before I opened a saddlebag and offered a plug kit and compressor. We fixed the tire and continued on with our adventure.
This isn't the first time having a compressor has saved the day. I bet most people would choose to carry one if it didn't take up any room. Well, it's gonna take up some room but there is a way to make them smaller. 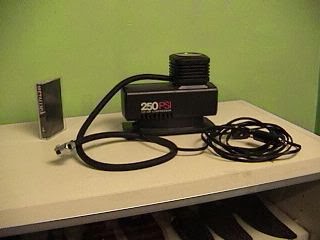 This is a basic el cheapo compressor I picked up at the hardware store. Its a smaller unit but way too big to be hauling around on a bike. 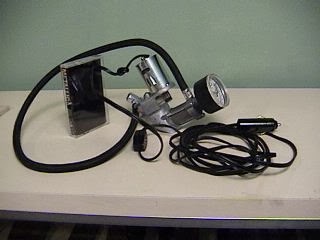 If you remove the working parts from the case you'll see that the compressor is actually pretty small. I've placed a cassette next to it for size reference. For you youngsters out there, a cassette tape was a device that would store music. You could get a whole album on one and it was only the size of a large smart phone. 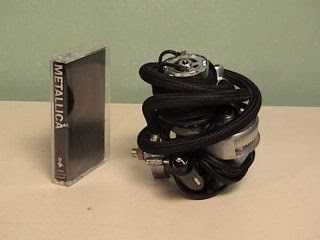 If you want it even smaller, the gauge can be removed as I've done here. The power plug could be removed also or converted to something that plugs into your bike.
I've seen it take anywhere from three to seven minutes to fill a rear tire depending on the compressor and size of tire. There are a few precautions you need to take when using this. First, you'll notice all the working bits are exposed so keep it out of the dirt. Also, keep your fingers away from the big gear on the crank. Finally, this thing will get hot.
This will fit into a ziploc sandwich bag. I try to always have one with me, but I admit that's not always the case. Luckily I've always had one when gremlins strike.
Posted by Scott Seidl at 6:10 AM