One in a Hundred

My wife has been self appointed as our road trip photographer as she rides on the back of the Ultra. Her mission is to whip out her phone and take a kazillion pics hoping to catch that one magic pic. Yesterday afternoon we were about an hour away when a storm front threatened to block our route home. This was a big angry cell and we could see a lot of rain coming down.
We raced to get around the rain and were successful even with a stop to view an eagle dining on some road kill. Those pics didn't turn out but this gem was on the camera when we got home. 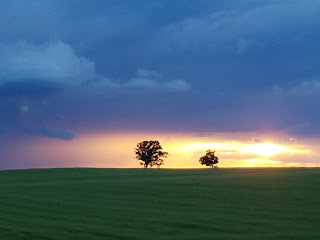 It's not really a pic of anything but I like it. For a phone pic at 60ish mph it turned out pretty good.