A Case Of A Missing Transmission

So I've been thinking about how to move forward in assembling the BSA engine and what I've decided was that the trans should be the next step.
It goes here but I can't put it there until I find the dang thing. 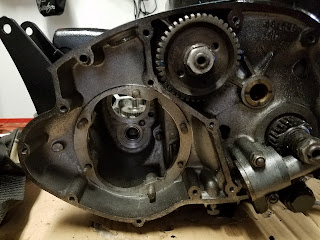 Somewhere on this cart is where I thought I had all the parts from the first tear down about twenty years ago. There's a bunch of stuff mixed in there that just doesn't belong so ignore that. I found a seal that was purchased back then and also a bearing needed for the trans. Some missing hardware was also a pleasant find. But where was the actual transmission? 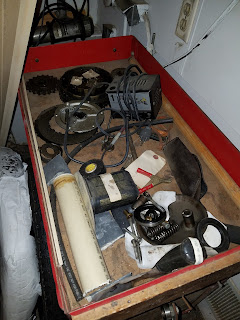 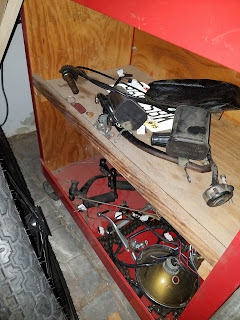 I must have searched about an hour and started getting pretty torqued off that I couldn't find it. My memory sucks, I accept that, but WTF? The garage and shop space is only so big and I should be able to cover every square inch in little time. About the third lap around the shop I started digging under a few layers of parts. 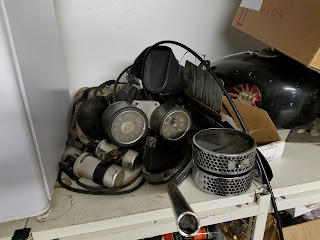 Then I spotted a huge clue that tripped the memory banks. Back there, against the wall, on the top shelf next to the mini fridge was a small gym bag. I now remember putting the trans in that bag and taking it to a bike show to discuss some issues with a brit bike nut that I knew would be there.  I think my concern was this bushing. 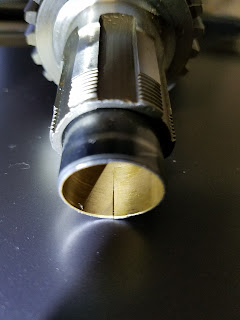 Was it cracked or built this way? I don't remember his answer but because I also don't remember trying to order one I'm gonna guess he said it was good to go. Fast forward a few hours since I typed that and I'm trying to figure out where this bushing belongs. Although slow, I finally remembered what happened here. I ordered a bushing from somewhere and when it arrived it looked like this: 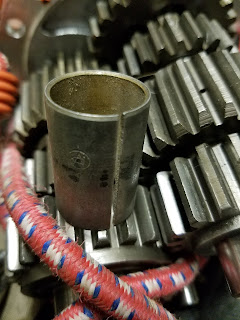 So I can just leave the original bush in place and continue with the assembly. As I type this the main bearing for the trans is in the freezer shrinking, allowing for easier installation. Except for one snap ring it looks like I should be able to finish up this portion of the build and move on to cam timing so I can adjust the valves and cap off the top of the engine. Schwinnnnng.
Despite my bungie cord efforts to keep everything in order, there are still a few loose pieces. An old service manual with schematics will aid me in getting all the pieces lined up, and in fact I found a spacer that goes on the front of those gears near the plate. At some point the whole row of gears must have fallen off. Part of the fun of this build is that old memories are slowly coming back about this bike. Even though I only put 200 miles on it in the last 37 years, I did spend a lot of time working on it as a kid and learning about bike engines. 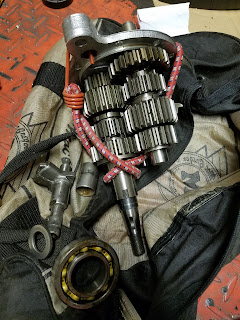 I'm taking this trans install slowly because it was the source of the original breakdown. I ran it low on oil because of a leak and a stupid means for checking the oil level. I'll get into that in a later post. I also seem to remember only having three speeds despite everyone telling me it's a four speed.
Will this finally be the year I hear the beast roar again?