We had a few days of snow, rain, sleet and general crap this past week and that meant I spent time in a plow truck. At times the snow was coming down pretty heavy and many people claimed they haven't seen flakes that big in a long time. I'd say the largest were sized anywhere between a poker chip and a bar coaster. For those of you that don't drink or gamble, that would be about the size of a key fob and a sport bike drive sprocket. For those of you that don't drive or fix sport bikes, they were bigguns. Ya I stretched the truth but it's my blog, I can do that. Call it fake news if you want. 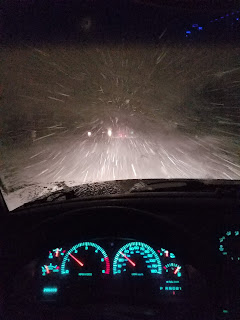 Visibility was crap but that really didn't seem to keep people off the roads. I think for the most part people got caught in it. We had a few 10 minute bursts that would produce an inch of snow for a total of three or four inches on top of the rain we had for the previous eight hours. It was a huge problem that still exists in gravel lots that are built up with ice, but I think we'll be able to clean those up this week as the temps are supposed to get into the 40's. I wonder if that will be some kind of record?
During all this snowfall excitement we have to keep trucks moving in the loading docks at a nearby manufacturer. Sometimes it can be like a carnival ride.

The asphalt is rutted from the trucks moving in and out of the same spots for years. This makes a pretty bumpy ride for the first few passes. Still, I wouldn't trade it for a desk job. In fact, it could snow every day this winter and I'd be fine with that.