Progress continues on the BSA build. I say build. I dunno if that's accurate. It isn't a restoration but it has been stripped down to the bare frame. I really am not sure exactly what direction it will go but I don't want to push whatever it will become so I continue assembling the source of propulsion.
To install the output bearing of the transmission I put it in the freezer to chill for awhile and then warmed the housing where it will spend the rest of its useful days. 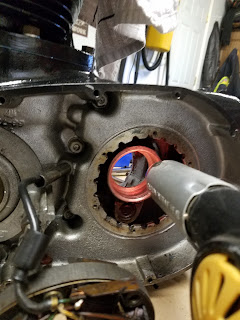 I like the above pic. Did I heat the aluminum to a red hot glow without any melting of the casting? Is that even possible? No, of course not. If the aluminum got that hot it would be a puddle on the work bench. The red glow is just a reflection from the heat gun. It didn't look like this on the phone screen when I took the pic. It's kinda neat when you scroll back in your picture gallery and find these "gems". 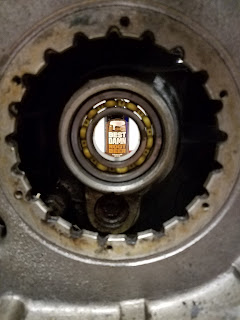 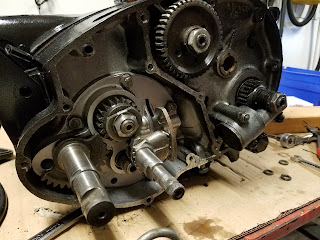 So here in the above pic we see the installed trans. The larger shaft is for the kick start and the smaller one is the shift shaft. The ratchet mechanism on that shaft that moves the shift plate is most likely the reason the bike only has three speeds. I cleaned it up but it really should be replaced. You'll also notice the idler gear between the crank and cam gears is missing. These gears are all marked so it was just a matter of lining everything up to achieve proper valve timing. No biggie. 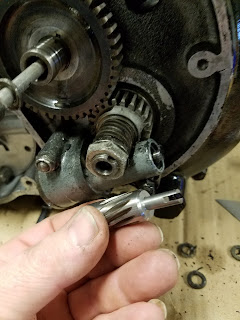 This is a new oil pump drive. On the right side of it is a slot for the tach cable. Look close and you can see the one that is still in the oil pump has the tangs broken off. I was delighted to find this new part among others that I don't even remember buying. 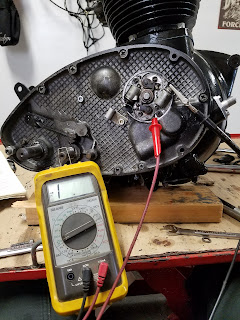 One thing I do remember is being fifteen years old and trying to wrap my head around things like valve timing, ignition timing and other basic engine principals. This time around it was no sweat and I was half in the bag.
There has been some talk (in my head) about converting to electronic ignition. One argument is that the bike may start easier which is a big bonus for a guy with a bad back and a kick only bike. The other argument is that this project is on a budget. If I'm gonna spend money it will only be on stuff I really need, like spiked root beer and black paint.