It was one of those rare January days where the temps soared into the upper thirties. We had light rain and snow was melting off the roof at work and forming a large puddle outside my shop door. We've given this puddle a few different names over the years because it really does become a pretty good sized body of water during a heavy rain. This "puddle" has given me a wet foot on a few occasions and today was no exception.
So I squish, squish, squish my way through the workday trying to ignore the case of trench foot developing in my right boot. I did a few repairs including some work on one of those compact suitcase generators. You pretty much need to be an ambidextrous, double jointed contortionist to work on these things. If you're not, then you have to be willing to do a lot of tedious wrenching to do even the simplest tasks. In this case, a recoil repair. The once compact generator was now not so compact and spread out over the entire workbench. Eventually I completed the repair and reassembled the unit to damn near its original condition. No leftover hardware is always a good thing.
Lunch came and went. I don't remember what I ate but I can tell you with no uncertainty that it wasn't a healthy meal. Afterwards I worked on our social media for a while. Yes, that's part of my job. I don't claim to be good at it but I enjoy it and nobody else wants to do it so it's kinda a locked in position. Nobody bucking for the job but no room for advancement. It's a wash.
Five bells and I make like a banana and split. It's a twenty mile drive home in a heavy mist but my trusty (that should have said rusty) old dodge is up to the task despite some pretty seriously misaligned headlights and wiper blades. Come to think of it, that truck really wasn't up to the task. Anyway, everybody that commutes knows their route and becomes used to the particulars of that route including where the cops usually park and eat their donuts. For me there are two specific spots that could be considered speed traps. For whatever reason, I was day dreaming as I sped through one of those areas.
I miss the soft glow of the old bubble gum machine globes on a squad car. These days we are subjected to the annoying glare of high intensity led lighting. I pulled over and waited for Johnny Law to catch up and make his case as the piercing lights filled the dark recesses of my cab. I didn't even need my dome light to search the glove box for my registration and proof of insurance. We had the standard conversation where he asks questions and I plead ignorance. I mean I wasn't even looking at the speedo and he was shooting radar. I should have asked him if he knew how fast I was going. As it turns out, he did know and it was a number I was a little surprised about. I chilled as he returned to his squad car to scrutinize my papers and investigate my driving record. As fate would have it, everybody I know passed by and saw me sitting like a rat with one leg caught in a trap. I could run but it would have required a lot of chewing and I wouldn't get far.  Instead I passed the time answering texts from those that drove past and saw me stuck there. Think about that for a minute.
When our public servant returned we had a discussion about my driving habits and decided the best course of action was to provide me with a warning. I happily agreed and continued on my way.
When I got home and took my boots off it occurred to me that I had somehow changed a wet foot to a lead foot that acted like a rabbits foot. Lucky me. 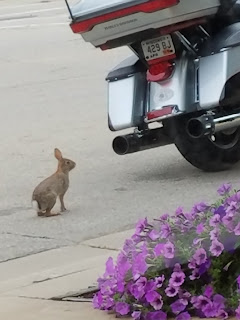