Potpourri (In a Funk)

Not really sad, just been busy trying to keep up at work. It's that time of season when I have to be in too many different places at once and am getting pressure from customers despite the fact that I haven't broken any promises (yet). The other day I was strong armed by a little old lady that must think I just sit at the shop and wait for the phone to ring so I'll have something to do. I tried to explain that she called in late and there were 18 kajillion people ahead of her. The conversation ending with me begging for her to give me until Monday (two weeks sooner than I planned) to spray the weeds in her yard. I think she must have been a hostage negotiator or used car salesman when she was younger. I must be getting soft because last week a second little old lady worked me over for $3 on a fertilizer quote. Come to think of it, both of those old gals used the hard of hearing routine to break me down. Ma'am, the price is $53. "what, $50?" No ma'am, $53. "$50?" $53, I said $53. "Did you say $50?" Yes ma'am, $50. "Ok, that sounds fair". Funny how she heard that part.
Remember when I told you my new years resolution was to be less of a dickhead? Less means I can still be a dick once in a while and that held true this week when I had to fire two customers. One was for environmental reasons and the guy understood when I explained applications to his property could pollute the lake. The other one was monsignor dickhead himself. This guy screwed us over on a bill under the last owners reign and thought because I had a new boss it was ok for him to pull that shit again. I gave him the FE (F**k Em). It's funny, I actually take a highlighter and write in big letters FE on the work order and hang it over my desk. It makes me think I still have some control of this madness.
I passed up three decent days this week to ride the bike to work. I just felt preoccupied. I think I can get through this busy season if I just schedule things in the right order. Take care of the big accounts, then the new ones that look like shit with all their weeds, then the loyal customers that have pretty clean yards right now and just get regular maintenance. Squeaky wheel gets the grease and put out fires in between.
I know I've been preoccupied because the other day my wife caught me looking off into space and asked what I was thinking about. I replied "the maximum application rate of acelepryn insecticide".
Allllllllrighty then. 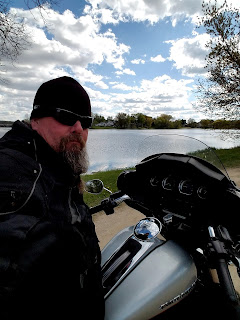 Today is the Slimey Crud Run. If you're going, have fun. I'll be spending time with my wife on our 29th wedding anniversary. Happy Anniversary Honey!

Just for fun I'll add a link to a funny skit from back when I used to like SNL. "We put a label on every bag. It says Kid, be careful, broken glass". Funny shit.