I don't know how it goes in your town but here abouts we have a "bulk pickup" trash day once a year. It's always the day after Mothers Day. The thought process here is that if you're a broke ass bum and can't afford to take your mother out for beer and brats, at least you can go to her house and clean out the basement. If you're already living in her basement then you gots to clean out the garage or attic. Either way it's a chance to do something nice for your mom. 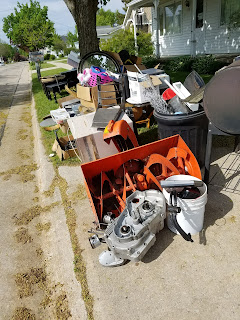 As it turns out, it's also a chance for broke ass bums to stock up on free goodies. I'm not looking down on anybody here. I know we're all in different stages of broke, some just worse than others. At least these people are willing to help themselves and not whine about how the world owes them a life.  Now the way I see it, unless it's actual junk like grandpas old skivvies or an unwanted toe nail collection, most people put this crap out to the curb hoping someone will take it home and use it. We sometimes arrange certain goodies by the curb in a presentable manner, kinda like the way a guy stages a home for sale, so as to make our crap more attractive. I admit to occasionally hiding a valuable goodie in a strange spot just to see if someone is adventurous enough to find it. They always find it.
Just before I started writing this yesterday a guy pulls up, turns on some music and starts carefully picking through everything out there. He claimed a lot of stuff and he was there a long time. I thought he was gonna break out a smokey joe grill, cook a meal and settle in.
A little later I hear the clinker clatter of scrap metal dudes digging around in my trash. I looked out the window to see a full truck, or so I thought. 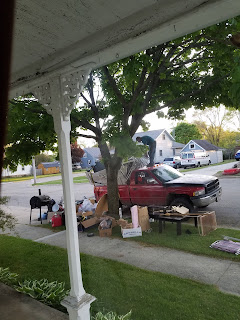 Turns out the driver claims there was plenty of room despite the pleas from his two buddies that begged him to leave some stuff behind. He wasn't about to pass up a score like this and sure enough they got most of it. A local kid snatched up a big smoker grill before they could get it loaded. The two buddies were relieved. 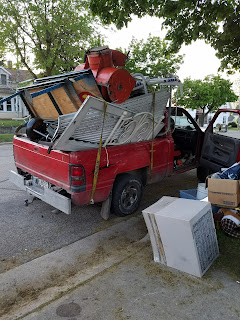 That a/c unit went on the truck too. These guys were from the next town over and I would be very surprised if those straps didn't let loose before they made their destination. I didn't have the heart to tell them they weren't gonna make beer or gas money with this load. I was just glad to see they were trying.
I still have all day today to haul stuff out there. I like the relief that comes from cleaning out the garage but I find it hard to throw some things away. I told my wife, as I hauled a tractor fuel tank out to the curb, that I had been saving this thing for seven years because I might need it for a project. I'm now having regrets and I might go see of it's still out there. Other items have been robbing space in my life for much longer. It's a tough deal because I'm looking at stuff I know I'll never use but I come up with reasons to keep it. I should either get strong or get drunk and make the decision to get rid of it. The scrap metal collectors will have it picked up way before the trash man ever gets here.

It used to be a hard to decide what to get/do for Mom on mothers day. Her garage was in good order and she didn't even have a basement. I have a reminder on my bike and think of her every time I go for a ride. If you can get this message Mom, just know that we miss you. 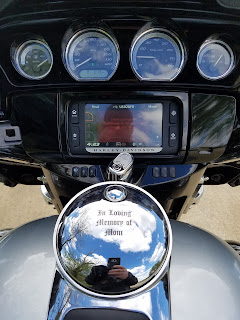