I told you about a second sidewalk brine sprayer that I was building. That unit needed some plumbing and last week I finished it up. I also added a bumper, fluid level sight tube, wand holder and even a different pump. The first pump shit out for whatever reason and my last extra pump was bolted in place. It doesn't flow as many gallons per minute as the other sprayer but this machine doesn't move as fast so it all works out. 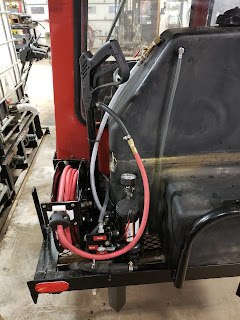 We had one short test run in the parking lot before it snowed Saturday morning and then put it into action. The plan with this unit is that it can do two jobs at once. That is it can broom walks of snow while applying brine.


The machine works well but there were a few glitches. I'm told they blew a fuse so I'll have to investigate why that might have happened but I suspect its not related to the sprayer but an issue with a power distribution box in the cab. The engine also died once with no obvious reason why. I guess this has happened in the past. Despite those few problems the crew still sprayed over 200 gallons of salt brine through the machine.
This is what it looks like after brooming and brine a few hours later. 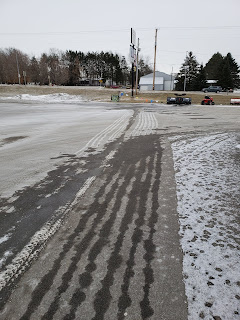 You can see where there was snow the brine is still wet and where the lot was dry the brine has dried. Eventually it would all look dry.
We have a third sidewalk machine that can remove snow with a front attachment and drop salt in the rear. There is still a need for a machine like that for those heavy ice situations but for these light snowfalls this system will work well. I think our experiment with using brine on sidewalks has passed and I don't see giving up on this system.
With our summer turf spraying equipment I've tried to do at least one thing each new year to improve efficiency. That could be in the sprayers themselves, truck/trailer setups or maybe something on the paperwork end. I want to apply some of that to this brine setup. We'll finish out the season with this equipment but the gears are already turning and I think by next year I'll have a few tweaks and improvements.