Not much interesting to report today. I'm writing this Tuesday night because we are suppose to be in the middle of a big snow storm. They keep pushing the timing back but I'm scheduled to go in and start plowing at 3am. Technically the ride in should be one of those times when I want a big ass station wagon to negotiate the deep snow. We'll see how much actually comes down but I'm thinking they may have over estimated this one.
I've got some back problems and if I'm on my feet too long it really bothers me. My boss doesn't mind me sitting on a stool while I do chainsaw repair and it seems like its just enough relief to get me through a day. I guess I use it a lot cuz it looks pretty rough and has recently been upgraded. 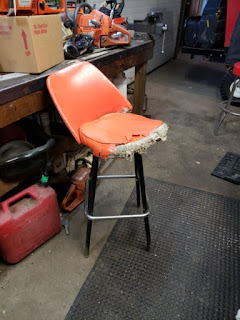 One of the guys in the shop was working on a truck that had a leaky air line under the cab. I don't know how the hell he got under here or why he thought this was the best approach but there he is. I tried sticking my head under there to see what he had been working on and could barely fit in there. It looks like a back breaking job. Yes, some of the guys in the shop were throwing things at his nutz. 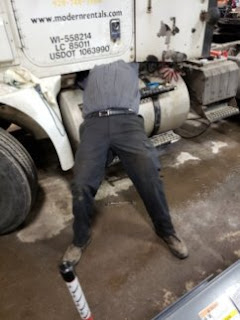 The insurance adjuster got back to me and approved $5100 worth of deer damage repair to the big ass station wagon. I'll have to kick in my $1000 deductible so they're sending a check for $4100. It still runs and the bent radiator hasn't developed any leaks yet. Hopefully it makes it to the first week of February when it goes in for the repair. 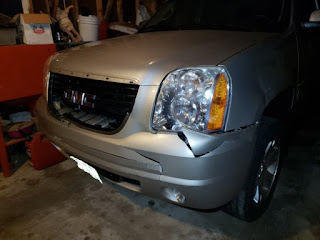 And finally a few words about the NFL. I watched the Saints get beat by the Rams but most likely that happened because of bad officiating. I really hate it when games are decided like this as was the case six years ago when the Green Bay Packers were cheated out of a victory. They need to put a system in place that allows for correcting these calls, or in this case a non-call. I'm not a Saints fan but I'm bitter enough about it that I probably won't even watch the super bowl this year.