Snow and Cold and Wind

It seems like every winter we get at least one decent snow storm and hopefully the one we just got is the biggest for the season. Don't get me wrong, I like plowing snow but a foot or more of the stuff dragged out over twenty four hours is bullshit to deal with. Maybe not for the home owner doing their own drive once or twice for the whole event but for us plow jockeys that need to babysit factories it can be challenging.
I got in the truck at 1am when there was only threeish inches on the ground. We knew a lot more was coming but the plan is to plow with the storm and not let any one area get too deep. I had about four hours before the early birds arrived followed by the bulk of first shift and hundreds of cars that would fight for good parking in about a dozen lots associated with this factory. When one of these workers sees a spot they want its like they have blinders on and can't see the plow truck they just cut off to get it. Screw em, they can walk through the snow. If they would have had 10 seconds of patience the spot would have been clean.
I'd been at it for a while and was starting to get lonely. What I mean by that is all the big iron in my crew was MIA. When I can, I like to plow with the window down and just as I was about to call and find out where they were I heard a loud noise. 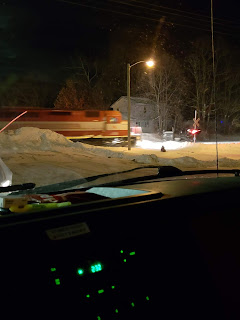 No it wasn't a train but was just as loud. The three pieces of equipment I was waiting for just went rolling by heading toward the shop. The big tractor was towing the big loader and that was being pushed by the smaller loader. Right then I knew it was gonna be a long day.
At about four hours in I just gave up on parking lots and we started cleaning production areas. What I mean by that is areas where truck and forklift traffic has to happen or plant production stops. This factory goes way back and there are many buildings joined together and a lot of outside forklift movement and foot traffic. Also because of the layout and the three separate locations in the city there is a lot of truck traffic moving product around. I'm sure the bean counters wish it was all under one big roof. Oh and to keep things interesting theres an active set of train tracks splitting the main plant in half.
Eight hours in and I'm finding that this 16' back blade works wonders in deep dry snow. I'm easily doubling production. This is the third year for me running this blade and I still find new ways to use it. The rear blade has down pressure but because its snowing so hard and its too cold for salt the truck traffic is really packing it down and the blade can skid over the top. The hydraulics on the blade won't lift the rear of the truck with 3 tons of salt in it but I've found a way to help it along. Eventually the extra pressure broke the 3/4" bolt holding the lift ram. No problem, I have a spare in my pocket.
Nine and a half hours in I heard another loud noise. This time I immediately recognized it as my stomach growling. Time for snow plowers brunch. 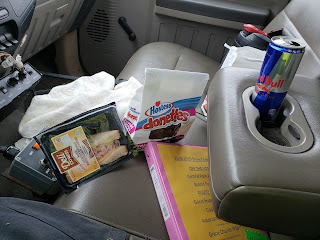 A gas station sammich and a bag of donuts. Wash the whole thing down with Red Bull and get back to work.
The snow is stacking up pretty good anywhere it hasn't been touched. Temps are pretty cold and the salt in my truck has been in there from the start. All that its good for is adding weight and traction so I can plow mostly in 2wd in flat areas. The wind is blowing so salting is really only done where absolutely necessary.
The eleventh hour caught me off guard. I got a call that they just announced shutting down for the day due to blizzard conditions. Normally the plan is to have parking lot lanes open so workers can easily walk to their cars and drive off once out of their parking space. That wasn't gonna happen but I did have time to scrape a few main employee exits. I then went and found a remote area to work in for a while till exiting traffic diminished.
The funny thing is that it stopped snowing just about the time they shut er down. Oh sure a good handful of people (cars) remained but for the most part the lots were empty. Now it was just a race to clear as many lots as possible in the next five hours. That was the planned quitting time for our shift with a return time of 1am again. We were having so much fun that we ran an hour over.
By the time I got home, cleared the end of the driveway and ate dinner there was time for a three hour nap. Overnight winds weren't as bad as expected. While everything had a good dusting on it from wind blown snow, many of them didn't need service. Thats a good thing because the ones that needed it took a while. I told you this old factory was pieced together and that means there are areas that are like cubby holes where the snow drifts in and there is no place to put it. I suppose in the big city you either truck it out or maybe melt it. Our plan is to push, pull or drag all that snow down the road to empty lots owned by the factory. Some of these lots are a few blocks down the road but this plan is easy and inexpensive. Its also quieter and that matters because this place has residential neighborhoods on three sides.
We were able to get all the lots done before first shift arrived. This is the only account I'm responsible for and when I'm done with the big iron operators I send them off to help elsewhere. That leaves me to run around and do inspections and cleanup. Usually that means cleaning empty semi trailer stalls, pushing back piles or just detail work. This time there was a lot of detail work that needed attention and I spent three hours putzing around.
So thats my plow story. Eighteen hours in the truck followed by three hours of sleep and then another eight hours in the truck. I then worked around the shop till noon and called it a day. I much prefer a two inch snow. Everything gets done once and I can be home like it was a regular work day. The weather liars messed up on the timing of the event as usual but their 10-14" estimate came in right around 12 or 14. Now we need to push piles back and make room for the next storm.