Our experiences with using salt brine on sidewalks have been positive ones and its clear we will be using this method looking forward. Because we don't want to rely on just one machine to do this work we decided to tool up another one of the rigs with a spray system. The first sprayer I put together works good for pre-treating but that unit has no means of clearing snow. This is a Steiner tractor we put a broom, blower or blade on to clear walks and we'll be able to spray at the same time we are clearing snow. Right now that barrel on back holds 400 pounds of salt that is applied by hand. We have a different rig with a drop spreader for salting walks also. 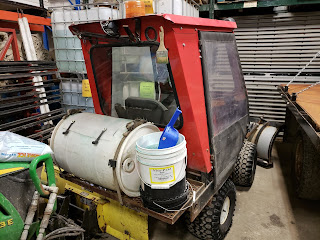 The plan was simple. Keep the existing rack and make a system that is self contained and easily removed. What I came up with disconnects with just four bolts and one wiring connector. You gotta start somewhere so after removing the old salt tub I bolted on a few rails. 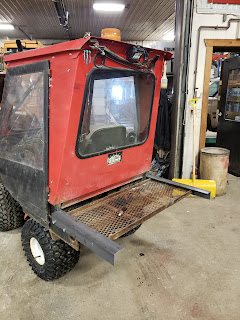 From there its just a matter of mocking things up then going back and welding it all together. This is the frame I made that everything will mount to. 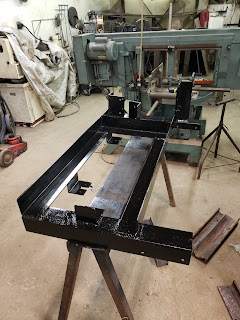 The unit isn't done at this time. I'm waiting on a few parts yet. 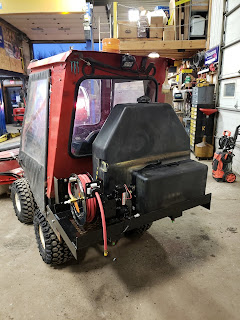 Like everything else built in this brine adventure, we used as much stuff as we could that was just lying around the shop. The tank is a take off from a vibrating roller machine. The pump was a spare and the hose reel was hiding under Als bench. Al pointed out that he had planned on using the hose reel in his bay. Ooops.
So all the basics are there. The wiring is done, the pump, tank, and reel are all in place. The nozzles are mounted underneath and all thats left is the plumbing. I'm thinking about making a protective rack around the unit but I'm afraid it will just offer a place for the crew to haul bags of salt. There's enough weight back there already.