A week or two ago I posted a video about a parts cabinet I was building to store harbor freight parts bins. The cabinet has been done for a while and has been working great. I painted it, added a handle and put a rubberized pad on top. This has been my go to work area in the heated portion of my shop and of course has been the one centralized location for most of my small hardware. Notice I said "most" and "small". A guy just collects so much stuff that isn't junk. Its stuff that you need to do DIY projects along with keeping the house functioning. I did throw a lot of goodies away and know I'll regret it because I can think of twice I was able to go back to the garbage can and recover something I decided I needed. I think my brain is like a rolodex card holder. Everything has a card assigned to it and every time something is handled, that cards gets moved to the front. How many times have you dug around in the garage, found something and thought "I could have used that on my last project". You could have but that index card was buried way back. Not further back than BB guns or measuring the length of a skid mark you just made with your bicycle, but pretty far back. Maybe some of the cards get stuck together and things just get forgotten. 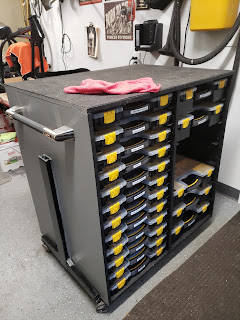 The reason I'm posting now is because I ordered a label maker and it just showed up. 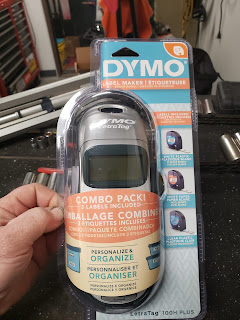 It seems decent enough and prints out some very important symbols along with the alphabet. The tray below might not even have anything in it but I just had to print out that label. 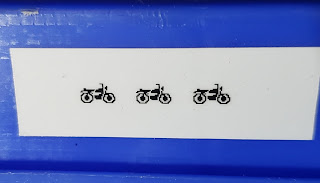 At first I thought the labels would be nice but not necessary but I've spent a lot of time pulling out trays, groaning, pushing trays back in and pulling out another. Lather, rinse, repeat. 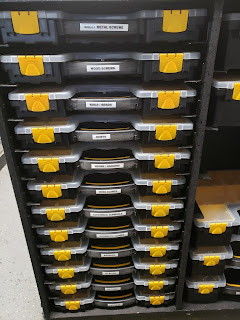 In the video post I said I wasn't sure about the extra seven large trays on one side. I decided on shelves for those blue plastic trays that were scattered all over the garage. 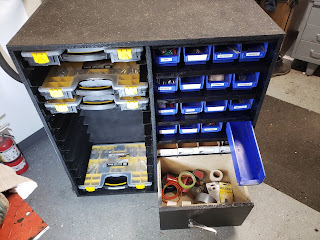 One of those "index cards" had 'kawasaki hiway pegs' written on it. I reached back into the scrap metal bucket and recovered a handle for my parts drawer. 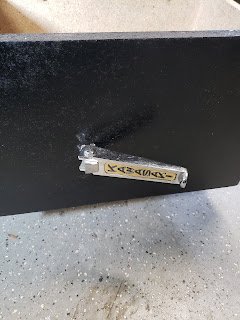 As you can see I still need to get a few more trays but maybe not as many as it appears. I've been giving some thought to how I want to store nuts and bolts and I just might make a few of my own trays. We'll see.