I See The Problem

If you clicked on this post thinking I had some interesting insight on the whole virus situation and how its affecting us then you give me way too much credit for being on the pulse of this nation. This blog doesn't dig that deep into politics or anything else thats not within my six foot circle.
I was working on a power cutter the other day. This one was brought in without the blade attachment but this is the type of saw typically used to cut concrete. I've shown one on this blog where I was cutting metal. Anyway there was a complaint that it wasn't running right. Luckily for the owner they stopped using it soon after issues started or they may have completely wrecked the saw.
When you work on this stuff all the time its amazing how quickly you can scan over a saw looking for problems. To me, this one stuck out like a Honda at a Hog rally. 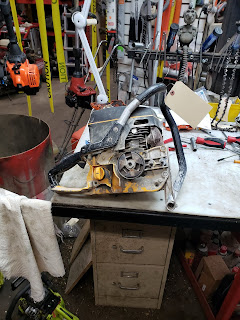 (above pic) Not much to see here. Its a power cutter sitting on a bench. 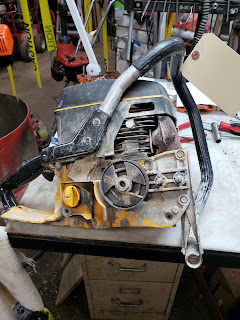 (does it make more sense to put the caption above or below?) My eye caught it even at this distance. To me something was out of place and there appeared to be a big clue. 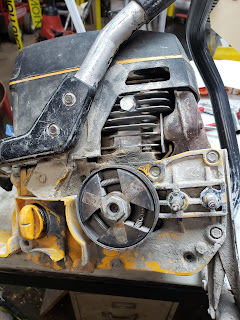 You really need a keen eye to pick it up, even this close. 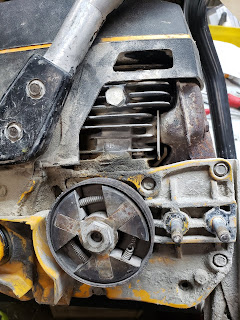 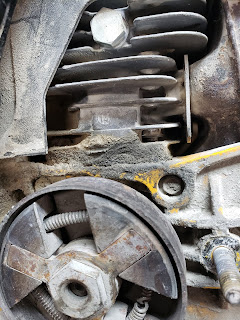 Come on, its right there. I'll give you a hint. Some of the dirt accumulation pattern is a clue to the problem. 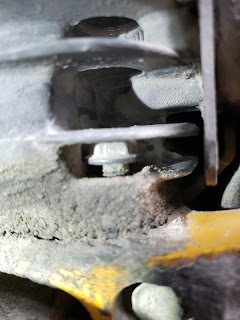 Bingo! A loose cylinder base bolt. Actually two of them were backed out like this. Its been sucking air and creating a lean condition but somehow the piston and cylinder still look good. This saw is old but would cost over a grand to replace so we're gonna chance putting a new gasket in and see how much longer it will run. Yes it may have subjected the crank bearings to some dirt but a base gasket is cheap and labor isn't bad on this one. Actually, cleaning it up takes more time than the repair.
Chainsaws always have a brown oily mess under the clutch cover. Weed wackers have green grass stain messes. Blowers are usually pretty clean but these dang power cutters always come in all jacked up with a big powdery mess that destroys my clothes, tools and work area. I've decided I hate working on them, even when the problem jumps out at you the moment it hits the bench.