I guess vacation means something different to everyone.  Most people think of it as a trip to some (semi)distant location where they can see natural wonders, be entertained or maybe just sit on a beach and relax. Today I'm on vacation and it consisted of nothing more than blasting down the interstate for almost 600 miles. For many that's just "traveling to the vacation spot". For me it was part of the fun. I like being on the road and I probably should be a truck driver. The way Friday was going at work I wished I were anywhere else. See I screwed up on a parts order and wouldn't be able to get a customer's saw going before this trip. That sucks because he's waited for it long enough. So Thursday we had the part shipped overnight for a Friday repair. This was a top end rebuild on an autotune chainsaw.  After putting it together and updating the firmware in the saw, it wouldn't hardly run. The clocks been ticking, I've got one foot out the door and my head is already on vacation. WTF? I tried a couple of quick ideas with no favorable results. The saw also got a new ignition module and this thing feels like it's got a spark issue. Could the new module be bad? Did I download the wrong firmware? Finally I just stood back, took a deep breath and thought about what i would look for if a customer just handed me this saw and described the problem. Sure as shit two minutes later I had it running. Early in the build when I was installing the cylinder I decided to thread the spark plug in to keep crap out. I never tightened it. I blame it on pre-vacation jitters.
I changed my plans and will arrive in Maggie Valley, NC tomorrow.  A little birdie told me motels were hiking their rates for the eclipse and I was originally thinking about stopping right about where it would have been the worst. Even the electronic message boards on the interstate in Illinois warned of possible delays due to eclipse viewing travelers. Illinois is not really a destination spot but rather a stepping stone. Today I took a couple of big steps with a pair of 150 mile legs and one almost oopsie when I looked down at the info screen and noticed it was asking me if it should search for a gas stop. Hell ya!
Pic was at a rest stop. There was a time when i would have been proud to drive this. 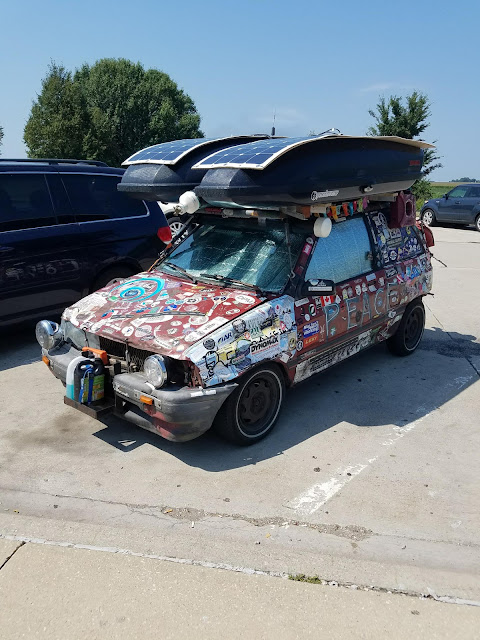