Air Brush Or Tool From Hell

I'm about sick of old man winter hangin on so long into spring and I'm sure you are too. We are in the middle of a winter storm warning as I write this on Saturday. I suppose that its because of the wind and freezing rain and there's talk of accumulating snow up to five feet depending on who you listen to. We already got a lot of rain, then a few inches of snow and then a warming spurt. Now its just windy and cold again with a layer of ice on everything. Fun times. My wife needed to use unconventional methods to check the mail. Apparently the mail man didn't have a hammer handy because the box was empty. 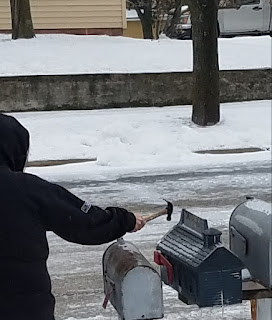 All this means I have time to dink around in the shop. I'm still fighting the paint job on the sporty and BSA. In fact I resprayed the BSA and I hate the way it turned out and will be doing it over again. No hurry, its been decades since that bike was on the road so I suppose a little longer on the paint wont matter. Half the sporty tank looks good. The other half looks like ass. I'm not sure what I want to do next so I just walked away from it for now. I screwed up the front fender and repainted it again for the fourth time. Painting is something I wish I were better at so I'll just keep practicing.
I spent some time with the air brush and found out that the crappy paint was my problem with flow through the gun. Actual air brush paint and reducer flows pretty nice. I spent quite a few hours trying different lines, patterns and such only to confirm the problem is that I have no talent. 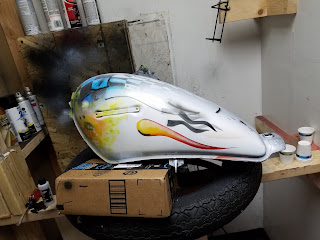 I ordered a french curve and some stencils because I have a feeling I'll be better at lines and graphics than freehand drawing. My first attempt at blending some colors looks very elementary school like but I'll keep practicing. 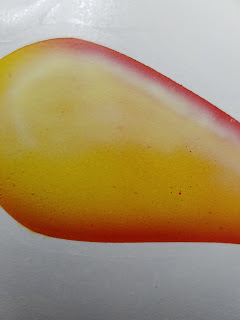 I've decided to check out some painting videos to speed up the learning process here before spring arrives. Its too crappy outside to do anything else.