Have you heard the one about the cheesehead that thought he could paint his bike? Turns out he keeps running into problems, and none of them are actual runs. So basically what we have is a pretty smooth coat of paint although nowhere close to perfect but it's good enough for my standards... 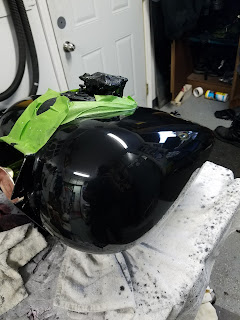 except for one spot where the paint is thin. You can't see it in the above pic but when the light is right its very obvious. Look at 11 o'clock of the bright spot created by the flashlight. Its like a ghost spot that pisses me off. If it weren't there I'd be just fine to leave this project alone. I have two choices and the first is to repaint at least that whole half of the tank. I'm not prepared to do that yet and instead I'm leaning on option two which is to cover it up. 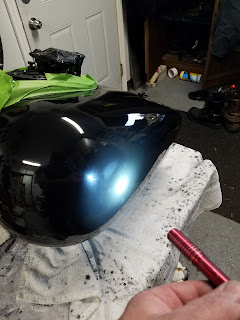 I laid out some wicked flames with narrow masking tape and started masking off the rest of the tank. At one point I decided to make a change and pulled off some tape. It turns out the tape damaged the clear coat. I think with all the layers of paint that maybe things are still a bit soft. The pic below shows the damage from the tape. The vertical lines aren't scratches, rather soap residue from trying to clean the mess but the mess wouldn't clean. Its not tape residue that you see. That paint feels just as smooth as can be. I had to take a power buffer and some Ultra-cut compound and go over the whole thing to smooth it back out where the tape was. 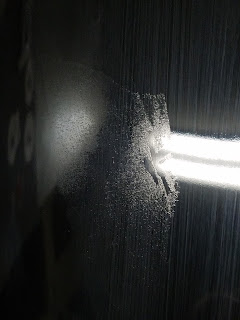 The pic below is another example of how the tape messed with the clear coat. 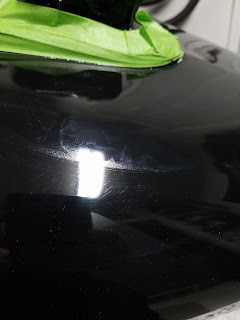 So now what? If I use less aggressive tape will I be ok? I doubt it. If I wait six months will I be ok? Maybe. Should I just put a sticker over the bad spot? If I free hand airbrush a design I'm sure to foul things up because I really don't have enough practice for that... but odds are good I'll risk that anyway.
Update: That was yesterday. This morning the tape damage reappeared. I don't know how because everything looked great after buffing it out.
At this point I don't know what I'm gonna do with it.