My brother and I worked together on landscape crews for decades until I finally landed a job where I am now mainly turning wrenches. He runs a crew in the neighboring community and periodically brings me equipment to repair. The other day he brought me a broke ass bacpac blower that had multiple issues and was a pain to start. Apparently 38 pulls was the magic number. I got the machine serviced "as good as its gonna get" given the fact that it has a bit of cylinder scoring due partly to an air leak and also carbon buildup. I advised they shouldn't rely on the machine to last long so it was decided they would replace it. Their "good" unit takes 18 pulls to start so we gave them a deal and they replaced both units.
Uncle Tommy lives on my route home so I just dropped the blowers off at his house. I had to check out his new shed anyway so the stop had dual purpose. After some bullshittin around, the idea came up that maybe a guy could get double pay for doing twice the work? 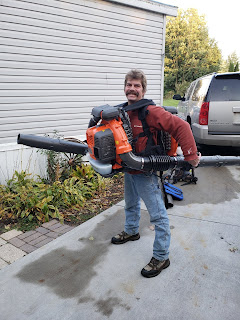 Strap one on back and strap one on front. Start in the middle of the yard and spin around like a tornado till all the leaves are blown to the edges. Simple.
While on the topic of landscaping I want to congratulate my daughter Mackenzie and her friend Tyler for passing the Landscape Industry Certified Technician test. Certification consists of written and hands on testing in many different areas of landscaping. Some examples include laying sod, reading plans, irrigation, skid steer operation and plant id. I guess Kenzi struggled with planting and staking a tree in 20 minutes but passed, then aced the chainsaw hands on test. Does that mean shes like her dad and is better at taking stuff apart than putting it back together? No, I think it just means shes a smart kid as proven by her high score in the company. I know this certification isn't an Olympic medal but its nice to see young people taking pride in everything they do, in a world of people just trying to scam the system.

Email ThisBlogThis!Share to TwitterShare to FacebookShare to Pinterest
Labels: chainsaw