I am a two cycle engine tech at work. Yes I fix weed wackers but also all forms of 2 stroke equipment, mostly chainsaws. One of the biggest problems I see is bad gas. Sometimes its old gas, as seen by the dirty fuel filter in this pic. 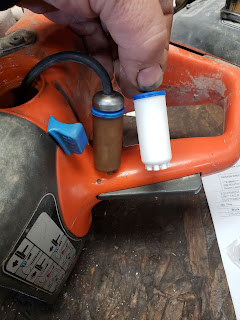 People just think if it starts on old gas then everything is fine and they got away with it. Not true. Old fuel can get gummy. That gum can lead to stuck piston rings and engine failure among other things including plugged up carbs.
Old gas with ethanol in it can separate and leave you with a layer of water in your can or fuel tank. 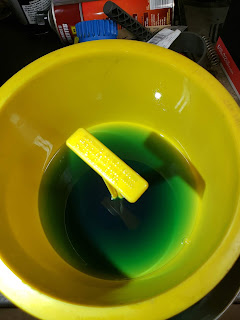 For that reason I always dump the fuel out of the equipment I'm working on and inspect it. You'd be surprised at some of the squaw piss I find in tanks. This funnel is for filling radiators but works great for small engine repair because I can just pull the stopper and easily return it to the equipment if the fuel looks ok. At first glance the fuel in the above pic looks fine but one needs to take a closer look. 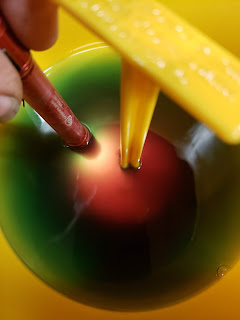 If I lower the flashlight into the mix I can see something else going on. It looks like red water. 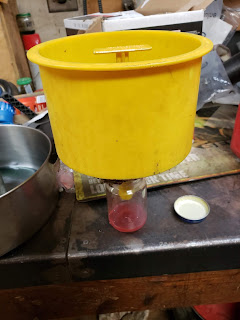 If I pull the stopper and tap some of it out I can get a closer look. Whatever it is turned out to be water soluble but I'm not sure why its red. Either way it answers the customers question, "why won't my saw stay running?"
Speaking of things that are a weird color, what do you suppose this bird had for lunch? Creamed grasshopper?  Mountain Dew and inch worms? 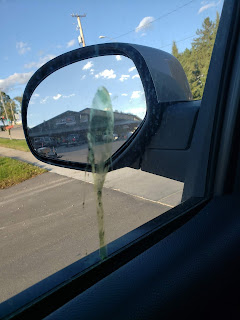 Whatever it was I'm bummed he had to relieve himself on my window.
And, speaking of bummed, I was working on a generator the other day and I was getting goofy trying to read tiny numbers on wires I had to trace. 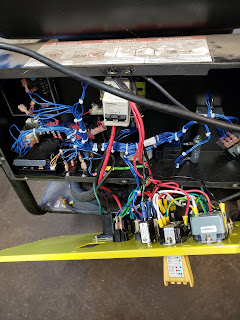 Why do those bundles all have to be blue wires? Throw in  a few different colors just to make things a bit easier. The troubleshooting flow chart I was following didn't seem to be in a good order to quickly trace down my problem. I spent a lot of time unsoldering wires and testing components and not finding anything wrong. Some of the stuff was either newer or older than the items labeled in the manual so not all the pin outs matched. Frustrating. As of this writing the thing ain't fixed yet. I think I know what the problem is but I don't want to influence a coworkers results when I ask him to test one component with his own meter and offer his conclusions. Until then the only thing this unit is generating is a headache.

Email ThisBlogThis!Share to TwitterShare to FacebookShare to Pinterest
Labels: workshop