I don't have a job thats critical to the welfare of people during this threat of the covid-19 virus so I'm laid off and doing my part not to make the situation worse. The governor has asked us in Wisconsin to stay home for a month. A lot of us get stir crazy after spending a whole weekend at home so I'm not sure how this is gonna pan out. Anyway, with a month of time on my hands I figure my garage and shop better be clean and organized by the time we get to the other side. Theres really no excuse not to get some of this around the house stuff done although I must admit that I'm pacing myself.

I might have mentioned that every time I go to Harbor Freight and have a coupon for them, I pick up some of these storage totes. 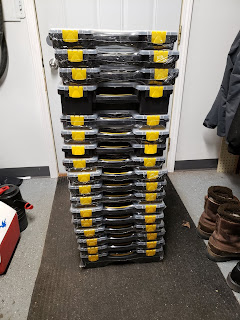 The picture isn't accurate because some of those totes ended up in the upper tool cabinet at work but then after that I bought some more. I think I have 12 smalls and 3 large here at home. The last couple days I've been gathering small items from around the shop and filling these up. 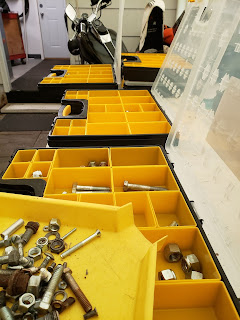 Eventually when I get through everything it will be so nice to go to one place to look for something. I found a lot of stuff I kinda knew I had but could never find when needed. An example would be pop-rivets. I found them in three different locations so depending on what size I needed and what pile I stumbled across first, I may have thought I didn't have the size I needed even though they were cleverly hidden in the bottom of a box of plumbing parts that was jammed behind a chainsaw case. The weird part is that as soon as I saw them I remembered how they got there. I guess the old mental filing cabinet is getting rusty because there was a time when I could set something down in my garage and remember its location for a long time as long as nobody messed with it.
The best two bucks I ever spent at Harbor Freight my have been on this parts funnel. It was an impulse buy and sat unused for months. 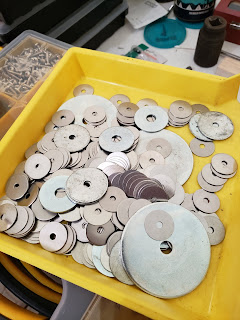 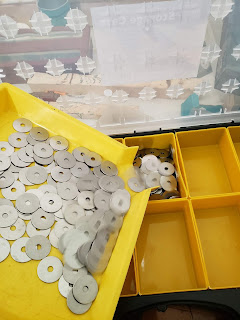 If you run into a project like this where you have to do a lot of sorting I highly recommend getting something like this. Actually you should make one from crap sitting around the house. You'd think I'd be a little pissed for not making one myself but it works so good that I'm ok with the $2 investment.
Part of organizing is knowing which pieces belong in file 13. Now at one time I had a rule that if something sat around for more than a year I would let it sit one more year and then throw it out next time it got in the way. Theres a lot of fudge factor built into that rule that allows me to interpret if something is actually "in the way." Take this box of hardware for example. 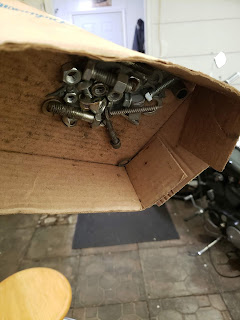 Thats all good stuff in there. No reason to throw it out, I'll just sort it, at least thats what I first thought. That pic isn't upside down and this wasn't some anti-gravity trick. Something got in there. Something with glue-like characteristics and sealed that whole mess into one glob of unusable scrap.
If I stumble across that box of scrap next year I'll certainly consider throwing it out. Wish me luck in my cleaning adventures.