Hades Over My Shoulder 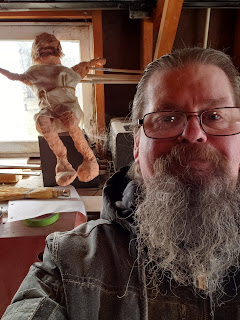 Last time I told you that I was keeping busy playing with my nuts...and bolts and all kinds of other hardware that needed to be sorted. I got a lot done with that and decided it was time to start making the storage system for the trays themselves. I had a few ideas and saw a few on pinterest and youtube but nothing was jumping out at me and saying "build this style." Finally I just looked around my shop area to see what would actually work. I have this weird file cabinet that was actually the donor for the roll up door on the tool box hutch. I only keep it around because its a nice little rolling work area. A lot of stupid little projects are done on this thing when all the other flat surfaces are covered in crap. 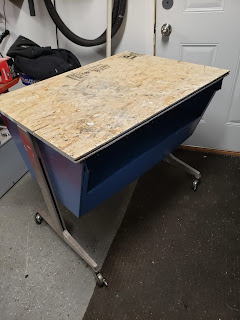 I decided to harvest the running gear and scrap the thing. My new cabinet could be built to replace it and also hold the trays.
To get started with the build I would need to get a 4 x 8 sheet of 5/8 particle board up onto a pair of four foot high saw bucks. Sounds simple enough but if you have to do it without damaging any corners on tender particle board then its a bit more of a challenge. If it were even a pound heavier I wouldn't have been able to muscle it up there, at least not without a backache. 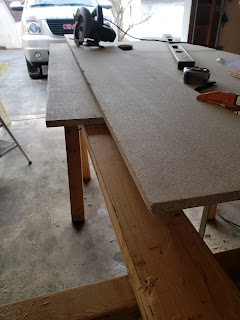 I got to use Grandpas table saw for a few cuts so thats bonus. The rest of the semi completed project can be found on the video. Oh, the little paper mache puppet is something one of my daughters made a few decades ago. I had to contact her and ask who it was supposed to be. My wife thought Zeus but its his brother Hades. I'm just glad it wasn't supposed to be me. He's been sitting right about in that same spot all these years and I had forgotten about him until he showed up over my shoulder. I picked the phone up to take a pic, it was in selfie mode, and there he was.
Check out the video: